Last October I reported that we’d clocked 40,000 members on the Tank Girl Facebook page. Unbelievably we’re now up to 50,000! Thanks so much to everyone who has joined for your continued support and appreciation. If you have a Fb account and haven’t checked it out yet, click on the above link and see what you’ve been missing! 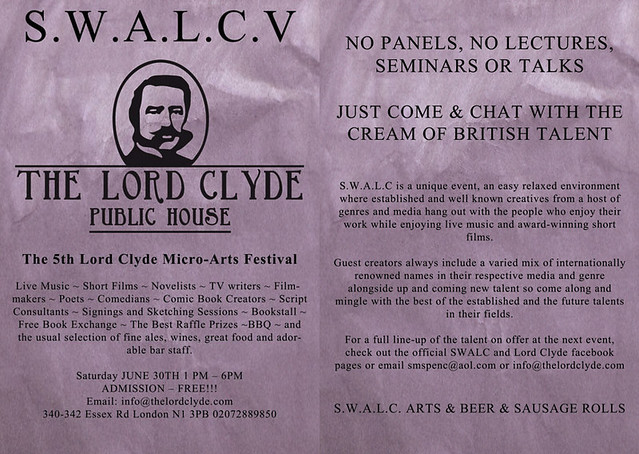 I will be attending the very wonderful SWALC on Saturday 30th June. An intimate, boutique mini-arts festival held in an esteemed London pub. The host is old friend/Deadline editor/BBC scriptwriter Si Spencer. Entrance is FREE, entertainment (including live bands, short films, poetry etc) is also laid on free. SWALC provides an opportunity for aspiring creatives to meet and chat with professionals (!) in an informal, pressure-free setting, with beer and sausage rolls. I will be available for chatting, drinking, signing etc. from 1-6pm. I will be bringing a small amount of Tank Girl books and merchandise with me, but I can’t guarantee having stock for you to purchase for the whole afternoon, so bring books if you want them signed (I never charge for autographs). I hope some of you can make it along, it will be great to see some faces and have a few laughs.

Five years ago, after a long uphill struggle to get Tank Girl back in print (which started to happen a few years earlier with the first Titan reissues), the first issue of a new TG series hit the stands.

I had been writing furiously for a couple of years and had my TG novel ARMADILLO already signed to a publisher. My new series, THE GIFTING, was looking for an artist and Ashley slipped into the driver’s seat with ease and skill.

Now you can get The Gifting collected as a graphic novel, or, if you are so inclined, download a digital version through the iVerse or Comixology apps. It’s very simply done through either a portable device (iPad, smartphone), or on your PC or Mac – just find the app through Google, the Android Market or iTunes, and search on it for Tank Girl.

Issue one of THE GIFTING is an astoundingly cheap $0.99 (62 pence!), and is drawn entirely by the hand of the maestro himself, Mr. Ashley Wood. With an extra gallery of artwork and his three variant covers, it is a serious bargain!

Carry Tank Girl around in your pocket with you.